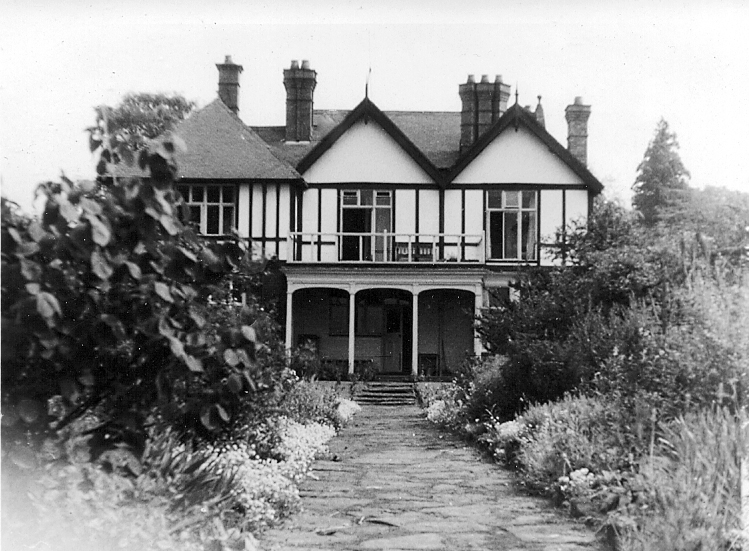 The photograph is of Thicknall Rise, a house designed by Tom Grazebrook whose father was John Phillips Grazebrook, a Black Country ironmaster. It was built in 1899 at the junction of Western Road and Newfield Road and was within Clent Parish until recent boundary changes. It was the home of Frank Percival Evers and his wife Ellen. Frank was a solicitor at Harward and Evers, 118 High St Stourbridge. The fence on Western Road has an unusual inset; that is part of the driveway to the house. The Evers’ second son Bryan G Evers was born in 1912, served at Dunkirk in WWII and was reported as missing in action. A memorial service was held at Broome Church, but he had been taken prisoner of war. He was awarded the Military Cross for his part in the action in which he was wounded. After the war he returned to Stourbridge to again practice law and later became Dudley’s coroner. Bryan lived in the house until 1968. It was later demolished, and houses were built on the site. The road named Thicknall Rise runs through what was the back garden area of the house. Rachel Paget - Secretary See hhfs.org.uk for details & contact

This page is published by Jeff Cope

Welcome to Hagley Historical and Field Society. On our website you will discover something of the history of Hagley and details of our activities. You will find a warm welcome at our meetings which are generally held on the first Tuesday of each month.

We enjoy a wide variety of speakers talking on a range of topics relating to the history of Worcestershire, the West Midlands and beyond. Visitors are also welcome to join the full programme of walks and visits. Whilst the majority of our members are happy to enjoy the meetings and other activities, a small group is engaged in active local research; some of their publications may be viewed our site.